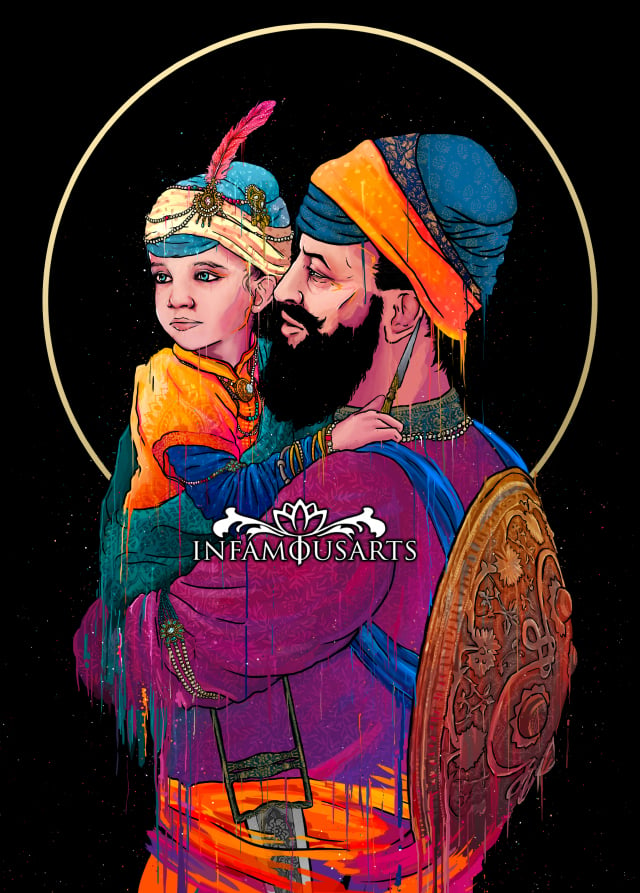 ਤਿਲਕ ਜੰਵੂ ਰਾਖਾ ਪ੍ਰਭ ਤਾ ਕਾ ॥ ਕੀਨੋ ਬਡੋ ਕਲੂ ਮਹਿ ਸਾਕਾ ॥
He protected the forehead mark and sacred thread of the Hindus
which marked a great event in the Iron age.
ਸਾਧਨ ਹੇਤਿ ਇਤੀ ਜਿਨਿ ਕਰੀ ॥ ਸੀਸੁ ਦੀਆ ਪਰ ਸੀ ਨ ਉਚਰੀ ॥੧੩॥
For the sake of saints, he laid down his head without even a sign.13.
~ Guru Gobind Singh Ji's baani of Bachittar Naatak (Sri Dasam Granth Sahib Ji) ~
A group of Kashmiri Hindus approached the ninth Guru for help. As their time had run out, they had no other choice but to turn to the only one that they knew could save them. Dhan Guru Tegh Bahadur Sahib Ji.
Aurangzeb, (the Mughal ruler) had given them an ultimatum, embrace Islam or prepare to die.
Guru Tegh Bahadur Sahib Ji asked his son who at the time was Gobind 'Rai' to make the decision of what should be done. This was the Ninth Gurus way of testing Gobind Rai to see if he was prepared for the Guruship "Gobind what must a father do?" Gobind Rai replied "Father, who is greater than you? You must go and give your own shaheedi to protect the honour of these Kashmiri Hindus" Guru Tegh Bahadur Sahib Ji was proud of his sons answer and made sure that Gobind Rai understood the consequences "Gobind Rai do you understand when I go I will not return? At such a young age you will become fatherless". Gobind Rai looked towards the Kashmiri Hindus "Pita ji, I may lose my father now but because of your sacrifice, thousands of other fathers shall live"
Guru Tegh Bahadur Sahib Ji stood up and gave his verdict "Go and inform Aurangzeb of the decision, if he can convert the Guru then he can convert the world" and thus over 5 days the Guru and his companions where tortured and Martyred but they never gave up their faith.